Filippo Bianchini was born in Orvieto, Italy, but he lives from 0 to 8 years in Rome. 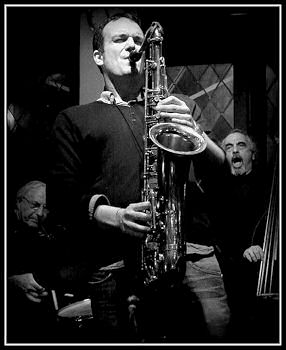 Thanks to the father's collection of LP and a family friend, Alberto Casasoli, began studying music at 7 years hold.
At 10, he started playing the tenor saxophone.

Shortly after, he began his first lessons of sax with Mauro Verrone, who introduced him to the great music of Charlie Parker, Lester Young, Sonny Rollins, John Coltrane, Miles Davis,Massimo Urbani and many others.
At 18 years hold, he starts the class of Saxophone with Mario Raja at the Conservatory F.Morlacchi of Perugia, where he graduated in 2007, obtaining the highest marks (10/10).

In September 2007 he moved to Netherlands in the city of The Hague to gets a specialization at the Royal Conservatory of Den Haag.

Here, he has the opportunity to study with one of the greatest european musicians: the american saxophonist and clarinetist John Ruocco.

Since September 2013 he lives Brussels, where he works with various groups as a leader and as a sideman.

In July 2014 he records a new album with great musicians as Nicola Andrioli on piano, Armando Luongo on drums and Jean-Louis Rassinfosse on bass (and as Special Guest, John Ruocco on tenor sax and clarinet and Rodolfo Neves on trumpet).

He wins numerous awards including the European Jimmy Woode Award 2012-Tuscia in Jazz Fest-Best for Best Saxophonist and Best Group.
He gets to the final at the Rotary Jazz Award 2012 and the Fara Sabina Jazz Competition 2009-2011.